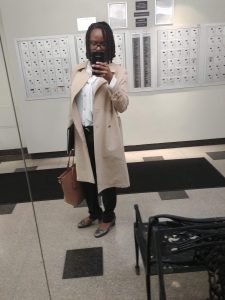 2 weeks prior to my full day training and pumping fiasco, I mentioned in my last blog post that I had the initial interview with the travel agency. The interview didn’t take as long as the training naturally, and I didn’t get engorged or anything like that. I did plan to pump once before getting back on the train since I was going to be away from my son for over 3 hours. As I’m writing this several years later, I just realized that I could have asked the travel agency to use an empty room! 😭😭 Oh well; shoulda coulda woulda right? At that time in my motherhood and breastfeeding journey, I wanted to remain small and out of sight. I didn’t want to give anyone problems with my breastfeeding or pumping. I also took for granted the landscape for breastfeeding/chestfeeding; I just assumed that there would be places to pump! I had no idea what was in store for me.

After the interview, I stepped out onto 34th Street and headed up to Herald Square. I did my research and found out that Macy’s has a mother’s lounge/nursing room on the second floor:

I thought, alright cool! Even though I had this information and felt good about my plan, I was still hesitant and very self-conscious (Anyone who knows me personally would think I’m making a joke because I’m definitely not a shy person LOL but breastfeeding/pumping was another level of vulnerability that I wasn’t prepared for). I went to the 2nd floor looking for the bathroom/lounge area….and found NOTHING! No seats, no lounge area, nothing except for toilets, empty space and a whole mess of people. Now I’m getting nervous because my plans are getting thrown off. But in my head, the flagship Macy’s and largest department store in the United States MUST have another location for folks to breastfeed/chestfeed and pump.

I went to the maternity section, I forgot on which floor, and asked the clerks there if they could help me find a place to pump. I reasoned that this would be the perfect place since they’re all about pregnancy and postpartum. They suggested the fitting rooms. I checked in the fitting rooms but there were no plugs in any of the stalls. So now I’m on the verge of panic because I had already walked around other areas and couldn’t find a private or semi-private place. I didn’t feel brave and I desperately wanted to stay small. My biggest fear at the time was breastfeeding in public. The times when I did it before, I felt extremely uncomfortable.

I saw a plug out on the sales floor next to a rack of bras as well as two ottomans next to it. I looked around and through my discomfort, I resigned myself to pumping out in the open. What else could I have done or where else was I supposed to go?? I needed to pump! Even though I was in the maternity section, and sat next to a rack of bras, I got sideways glances from a man shopping.

I kid you not, he looked just like this:

The damn irony of it all! I didn’t want to be a trailblazer or someone trying to normalize breastfeeding/pumping. I wasn’t demonstrating or protesting. I simply wanted a private place to provide food for my child. My advice to myself would have been to have a backup plan. Arrange for a private room at the Empire State Building. Have a battery pack. At that time, my brother-in-law worked as an Operations Manager in a Macy’s in Florida. Before moving to Florida, he worked at this same Macy’s that I was in. He told me the pumping protocol; ask a manager to use their office space. Breastfeeding, chestfeeding and bodyfeeding folks should not have to jump through hoops to express their milk.

Requirements for pumping in public

Urban Design is a study that ensures public spaces are designed in a way that every member of the community feels welcomed. I certainly did not feel welcomed at Macy’s that day – between the clerks unable (or even unwilling) to help me and shoppers side eyeing me. Black women and lactating folks already have the lowest breastfeeding rates in the United States. Atmospheres like the one I just described does NOTHING to help increase our breastfeeding rates and decrease breastfeeding disparities. It just pushes folks away from breastfeeding when they feel like they have no agency or entitlement to do so. And who suffers the consequences of this? Our babies miss out on important substances in human milk such as oligosaccharides, immunoglobulins, stem cells, and antibodies. Mothers miss out on health benefits such as decreased risk of cardiovascular disease and breast cancers. We need our politicians to include breastfeeding folk in their decision making processes. We need public retail spaces to be able to consider and accommodate the needs of all breastfeeding/chestfeeding families:

I left this review a couple of months after my visit:

And sadly, nothing has changed since then:

If you’re a new mom and want to breastfeed in public but don’t think you have the tools to do so, book an appointment with me and let’s get you the support you deserve.

Due to the current COVID-19 crisis, support for parents and their babies will be held virtually until further notice. Appointments can be scheduled by clicking here